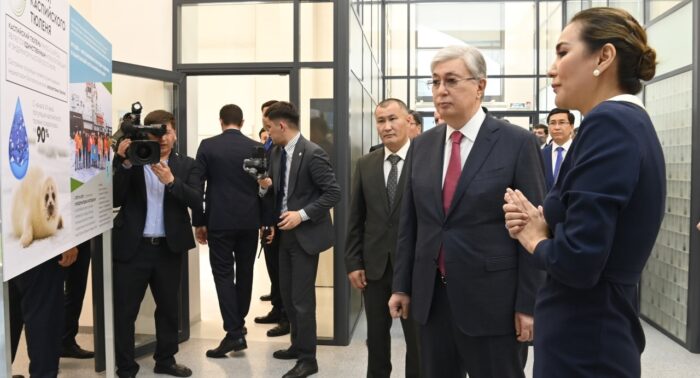 The management of the Institute presented promising scientific developments in the field of water conservation, soil purification from oil pollution and nature preservation of  the Caspian Sea.

Almaty, June 1, 2022 – President of the Republic of Kazakhstan Kassym-Jomart Tokayev visited the Central Asian Institute For Environmental Research in Almaty city. Yerbolat Askarbekovich Dossayev, Akim of Almaty city also took part in the meeting. The management and staff of the Institute told high guests about the promising developments of Kazakhstani scientists as well as about the implementation of programs aimed at preserving the ecology of the Republic.

The Institute was established in 2012 by Aselle Tasmagambetova and a business team graduated the State University. Today, created through private investment, the CAIER conducts fundamental and applied scientific research in the field of environmental protection and ESG, works with leading enterprises and companies in Kazakhstan. The priority areas of the Institute are environmental research, recycling of petrochemical industry waste, water supply (water treatment and water collection), as well as the study and rehabilitation of the Caspian seal.

Unique technologies in the field of soils and reservoirs cleaning were demonstrated to the highest-level leaders. In particular, the Institute has developed methods for cleaning the soil from petroleum products. The Institute has a patent No. 2864 for the Utility Model “Reagent for Cleaning Soils from Oil and Petroleum Products” and a patent No. 6745 for the Utility Model “Composition for Production of Construction Materials for Oil Contaminated Grounds.”

Specialists of the Institute have also developed a technology for cleaning water from heavy metal ions. The invention can be used in production of water for technical needs, as well as for purification of urban water bodies. The proposal on full-scale tests of technology on one of the reservoirs of Almaty city was sent to the Akimat of the city. In the building of the Institute itself, built according to the latest “green” technologies, rainwater collection is organized and an installation is functioning to obtain water from atmospheric air.

Kazakhstan has a leading role in preserving the ecology of the Caspian Sea. The Caspian seal is the only marine mammal and endemic of the Caspian Sea and the status of its population can be an indicator of well-being of the whole ecosystem of this large region. Since 2017, the Institute has been dealing with seal preservation issues, including organizing five international expeditions, and in 2019, together with the Saby Charitable Foundation, opened a Center for the Study and Rehabilitation of the Caspian Seal in Aktau city to save the endemic population in the Kazakh part of the Caspian Sea.

Kassym-Jomart Tokayev promised that he  will see to it personally to resolve the problem of reducing the population of the Caspian seal.

The President noted the need to study the causes of this problem, during his visit of the Central Asian Institute for Environmental Research.

Founder of the Institute, Aselle Tasmagambetova: “The management and staff of the Institute sincerely thanks the President of the Republic and Akim of Almaty city for the attention they pay to environmental protection, ecology and sustainable development. I hope we were able to present our scientific developments and practical activities to the honored guests, which we conduct to preserve the nature of Almaty, Aktau, the Caspian coast and the whole territories of Kazakhstan.