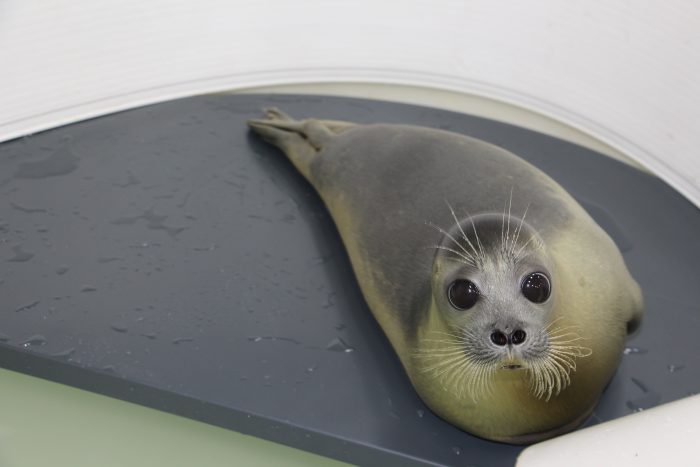 Today, on Kulaly island in the Caspian sea was released seal Pusa caspica, which was found in seriously bad condition at the end of March.

The special operation was carried out by specialists of the Caspian seal research and rehabilitation Center together with the border guards of the 2nd Сoast guard division of the Department of Border Service of the National Security Committee of the Republic of Kazakhstan in the Mangistau region and with colleagues from the Department of Fish Inspection for the Mangystau Region of the RSI and the Zhaiyk-Caspian Inter-regional Basin Inspection of Fisheries.

Recall that an immobilized and exhausted seal from the Red Book of Kazakhstan was found by local residents in Bautino on March 29. According to eyewitnesses, he was there for two days. Its weight was just over 4 kilograms, with a norm of 10-12 kilograms. The full restoration of the animal took place at the Caspian Seal Research and Rehabilitation Center (CSRRC) in the city of Aktau, where all the necessary veterinary and rehabilitation measures were carried out.

– This is the first seal in 2021 that entered to our Center, which has all the conditions for the treatment of sick and injured representatives of Pusa caspica. Two years ago, we opened the first research Center in Kazakhstan for the study of Caspian seals. And today we see good results and can talk about our comprehensive readiness to rescue animals that are now threatened with extinction, – said Aselle Tasmagambetova, founder of the Central Asian Institute for Ecological Research, which oversees the activities of the CSRRC.

One of the important goals after treatment and rehabilitation is to prepare the seal for release into the natural environment. Therefore, the contact of the Center’s specialists with the animal was limited. Weight and ability to fish independently were other important factors before releasing a seal into the Caspian Sea. By the time of independent life, the weight of the seal was 18.5 kilograms (in the natural environment they weigh 14-16), an identification tag was attached to it. After the releasing a rare endemic into the sea, within an hour it was observed by scientists. At this time, he joined his relatives.